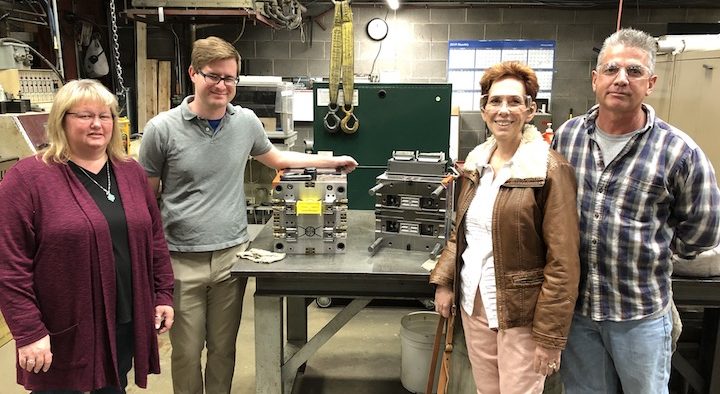 The ability to stay safe on a jobsite is under a greater microscope than ever, but accidents can still happen. However, Carnie Cap can help by minimizing impalement injuries from falls. “The people who work at this company have a commitment to making sure people are safer,” Wendy Hunt declares.

Hunt is the co-owner of the Moline, Ill.-based company, which sells construction safety products that cover exposed rebar and reduce the rate of impalement. The inventor, a site safety auditor, developed its system after receiving complaints on a jobsite that standard rebar caps were falling off or impalement was still occurring upon impact. The concept for Carnie Cap’s system placed two-inch by four-inch lumber in two squared U-shaped brackets that were supported by tubes that encased rebar.

The product was tested for nine months before being released on the market. The Carnie Caps are so effective that they can withstand a blow of 250 pounds dropped from 10 feet without the rebar breaking through.

“It’s the safest way to get the job done in terms of impalement protection because on impact the lumber absorbs the rebar rather than allowing it to be deflected and still cause impalement,” Hunt says. “Once people become aware of it, it becomes the go-to choice.”

The firm, Hunt explains, has a facility in Moline, which has allowed Carnie Cap to better meet demand. Before Carnie Cap hired PPC, the firm saw its lead time become erratic ranging from three business days to up to three weeks “which had never happened before,” she recalls.

“Now we are at a point where the lead time is back to one to two business days, which gives our customers more precise information on when they can expect to receive their orders,” she notes that PPC’s location in Moline allows it to reduce shipping costs for many of its customers.

It also has given Carnie Cap more oversight during the manufacturing process. “If we ever have a problem, we can hop in our car and we’re there in 10 minutes,” she says. “We have the ability to keep a handle on it.”

Carnie Cap also has the ability to ship small packages and over-the-road shipments five days a week instead of four. “That’s been a great benefit,” she says.

Hunt also praises PPC’s operations, which use state-of-the-art computer systems to keep information at hand. “Everybody in the company can look up any information that we need, and we can have it in 10 minutes,” she describes.

Previously, Carnie Cap did not have as much access to inventory information. She notes that PPC’s system keeps track of every item it produces, as well as where it can be found in its facility.

“Our plan is to be changing them once a month,” Hunt says. “It’s important to us to make people aware of the necessity of safety.”

Carnie Cap not only wants this information to be read by those who are new to the construction industry, but seasoned veterans as well. “Anybody, no matter how long they have worked in the industry, can have an accident,” she asserts.

“These articles are part of our plan to increase awareness of the dangers faced within the construction industry and to show innovative approaches to address these dangers.” she says. “We appreciate people being able to go out and build things. We want to keep them out there.”

New Features
Carnie Cap is in the process of obtaining a patent on modifications to its namesake product. “It’s very exciting,” Hunt says, noting that the new feature will make it faster and easier to install.

It also will allow users in California to more effectively increase the amount of lumber they put in the U-shaped bracket on the cap. “California requires double the thickness,” she says.

This will eliminate the possibility of the lumber moving on impact. “It is going to make the product safer, because the chances of the two by four getting knocked around are not even going to be there,” she states.

Customer Focused
Hunt is proud of Carnie Cap and its workplace, which not only promotes safety, but follows core values such as integrity, quality and dedication. “We don’t just have them,” she asserts. “We actually run the company this way.”

For example, when it comes to quality, Carnie Cap focuses on providing the best level of protection to keep construction workers safe. In addition, “We are personally available to address your concerns and answer any questions you may have about our products,” she says.

Hunt sees growth ahead for Carnie Cap, particularly after it completes the patent process and launches its new product. “We are also in the process at looking at other products to carry,” she adds.

But the company will be particular when choosing which products it adds to its lines. “They’re going to have to be something very special,” she asserts. “We’re just keeping our eyes open for innovative ideas.”

7 COVID Precautions to Build into Your Construction Estimates

How You Should Avoid the ‘7 Deadly Sins’ of Construction

How Technology Can Impact Your Field Operations, Today and Into the Future